based on the novel by Rafael Sabatini

Unjustly sentenced to slavery on a Caribbean island, the bold Dr. Peter Blood falls in love with the lovely Arabella Bishop, the lady of the plantation. When Blood escapes and takes up the life of a pirate, it appears fate has separated them forever…or has it? Filled with swordfights and pirate battles, love and treachery, and even a song or two, Captain Blood! is a pirate adventure perfect for the whole crew. Captain Blood! premiered at First Folio Theater in January, 2017. Originally performed with a cast of 11, the script is flexible and can be performed by as few as 8 or as many as your stage can hold. How large do you want your pirate crews to be? The script also suits both gender non-specific and ethnic non-specific casting. So if you’re looking for an action packed, romantic comedy that gives you totally flexibility for diversity in casting, Captain Blood! is the script you have been looking for.

(Script allows for much doubling and tripling as desired)

Dr. Peter Blood: The hero, in the mold of Errol Flynn! What more needs to be said? Arabella Bishop: Mid-20’s, which was old for an unmarried woman of her time. “She used with all men a sisterly frankness which in itself contains a quality of aloofness rendering it difficult for any man to become her lover.” Colonel Bishop: Sadistic plantation owner, Arabella’s uncle Governor Steed: Pleasant but ineffective governor of Port Royal, Jamaica Hagthorpe (Narrator 1): bumbling sailor Wolverston (Narrator 2): the one-eyed giant Ogle (Narrator 3): gunner; has been around naval ships his entire life Pitt: navigator; former Midshipman, so he’s of the upper middle class, son of a successful merchant Gardner: a clever slaver, but a bit of a whiner Plummer: the cruel and sadistic overseer Dr. Whacker: An officious, vainglorious man whose intelligence is even less than his detractors credit him for. Don Diego de Panadero, Captain of the Cinco Llagas (The Five Wounds, referring to the five wounds of Christ): Aristocratic, scheming, a man not to be trusted Esteban de Panadero: Young son of Don Diego Don Alán de Panadero, brother to Don Diego and Captain of the Encarnacion: the twin to his brother in every way Lord Julian Willoughby: in his 30’s or 40’s; representative of the English Crown; an elegant but down-to-earth member of the ruling class; he carries himself with the easy assurance of a man of rank; a possible rival for Arabella’s affections Misc. Pirates, Sailors, and Citizens of the Town 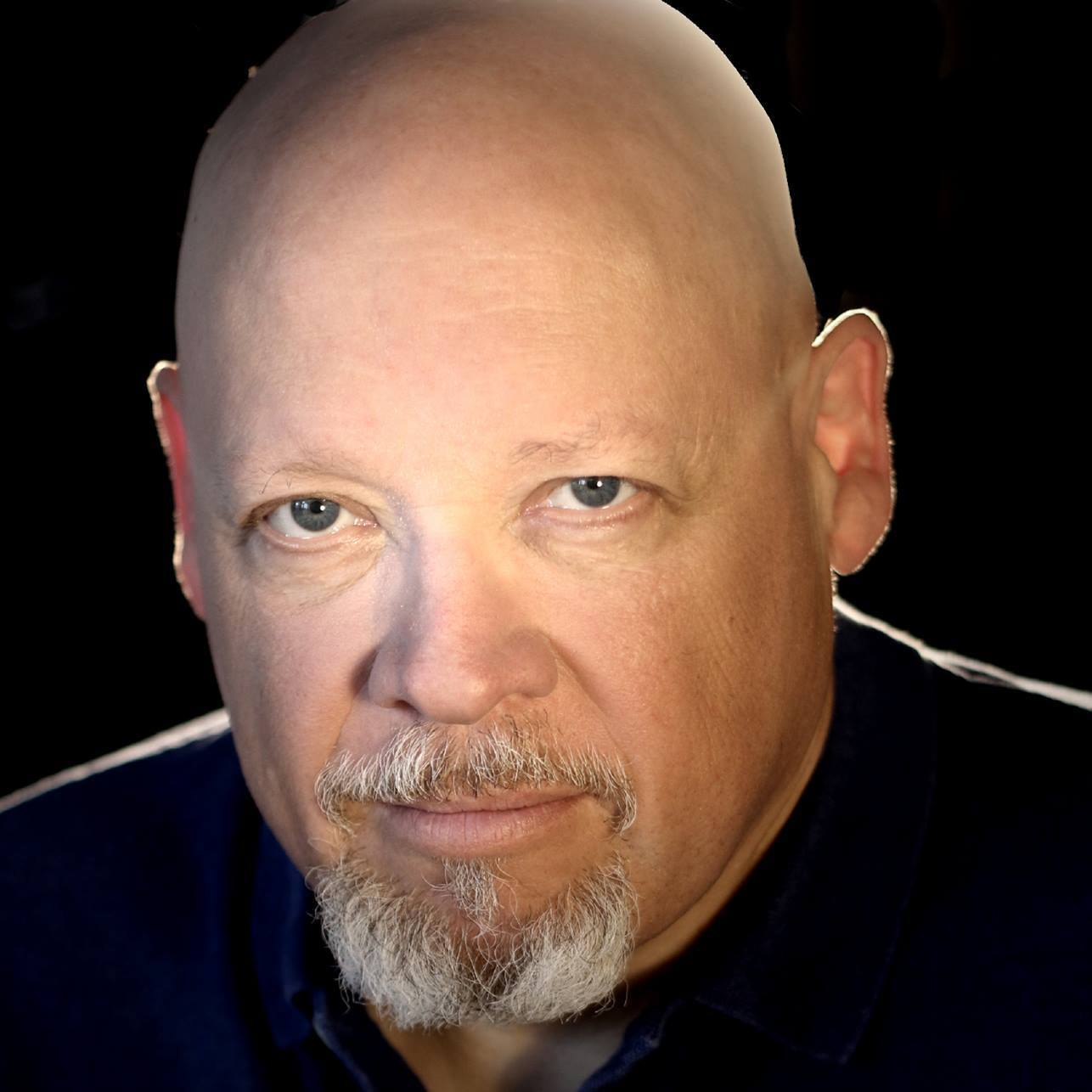 DAVID RICE is a playwright specializing in adaptations, whose works include Captain Blood!, Cymbeline: A Musical Folk Tale (Jeff Awards – Original Adaptation and Original Music), The Madness of Edgar Allan Poe: A Love Story (Jeff Nomination – Original Adaptation), The Castle of Otranto, and Dean Monti’s Why Dogs Don’t Talk. He is the Executive Director and Co-Founder (with his late wife Alison C. Vesely) of First Folio Theatre, where he has produced over 50 productions which have earned 36 Jeff Nominations and 5 Jeff Awards. David is a proud member of both the Dramatists Guild and Actors Equity Association.

“Captain Blood! at First Folio has charm, wit and good, old-fashioned swordplay. Toss in some rollicking interstitial songs by Rice and Christopher Kriz and a supple supporting ensemble and you’ve got a show that hits the sweet spot between mid-winter escapism and timely call to action.” Chicago Tribune, ★★★ ½ (out of 4) 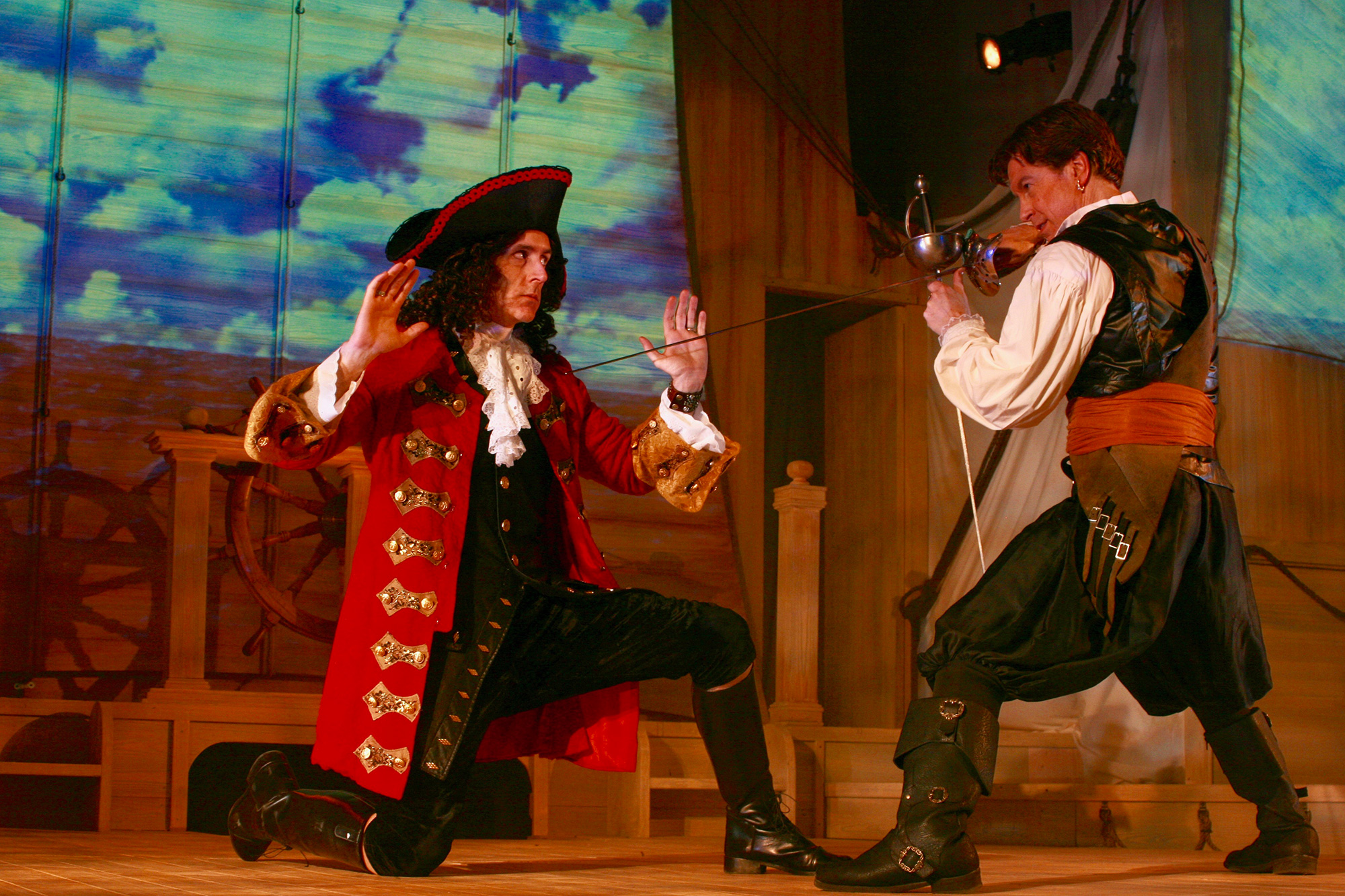 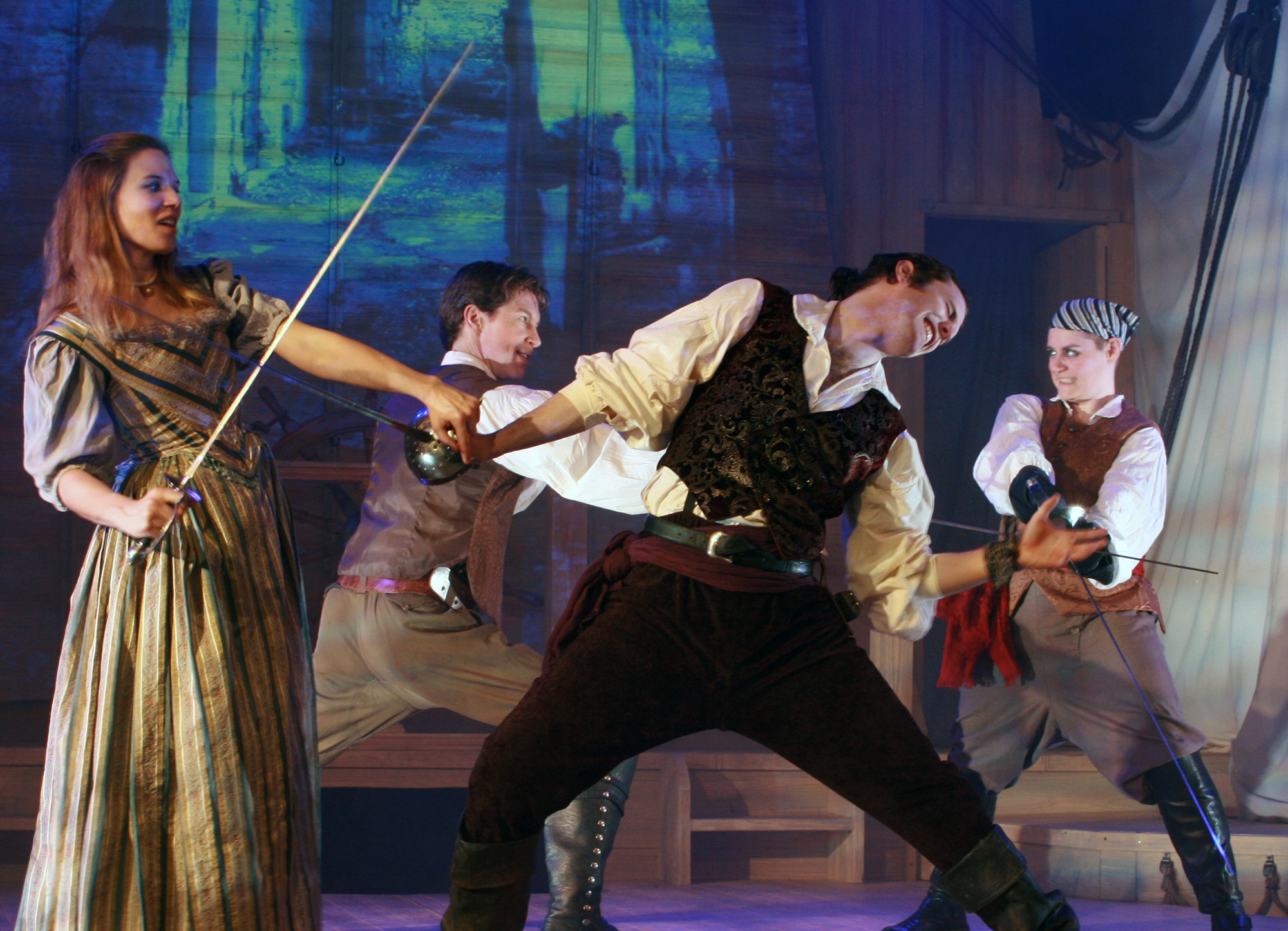 “A hearty sea shanty may not be the way swashbucklers typically begin. But when it’s accompanied by a rollicking battle, like the one that launches First Folio Theatre’s family-friendly “Captain Blood,” the pairing is boffo for this zesty romance/adventure tale… But Captain Blood! isn’t all about the battles. It’s about duty and justice, compassion and loyalty, and the deep, abiding desire for freedom — all wrapped up in a jolly good time.” Daily Herald ★★★ ½ (out of 4)
“Bloody good fun…with a suprising amount of action! You should go at once before it sails away. Highly Recommended Splash Magazine “Swarthy pirates flashing rapiers, saucy wenches and ridiculously coiffed villains. In all, there’s much to applaud in Captain Blood! David Rice’s adaptation of Rafael Sabatini’s 1922 adventure novel is a fine romp over land and sea, and an equally excellent antidote to the mid-winter blues. Punctuated by self-aware humor, pointed political commentary and a whole lot of pleasingly taut, hairy pirate abs…it’s straight-up cracking fine storytelling.” Chicago Theater Beat ★★★ ½ (out of 4) 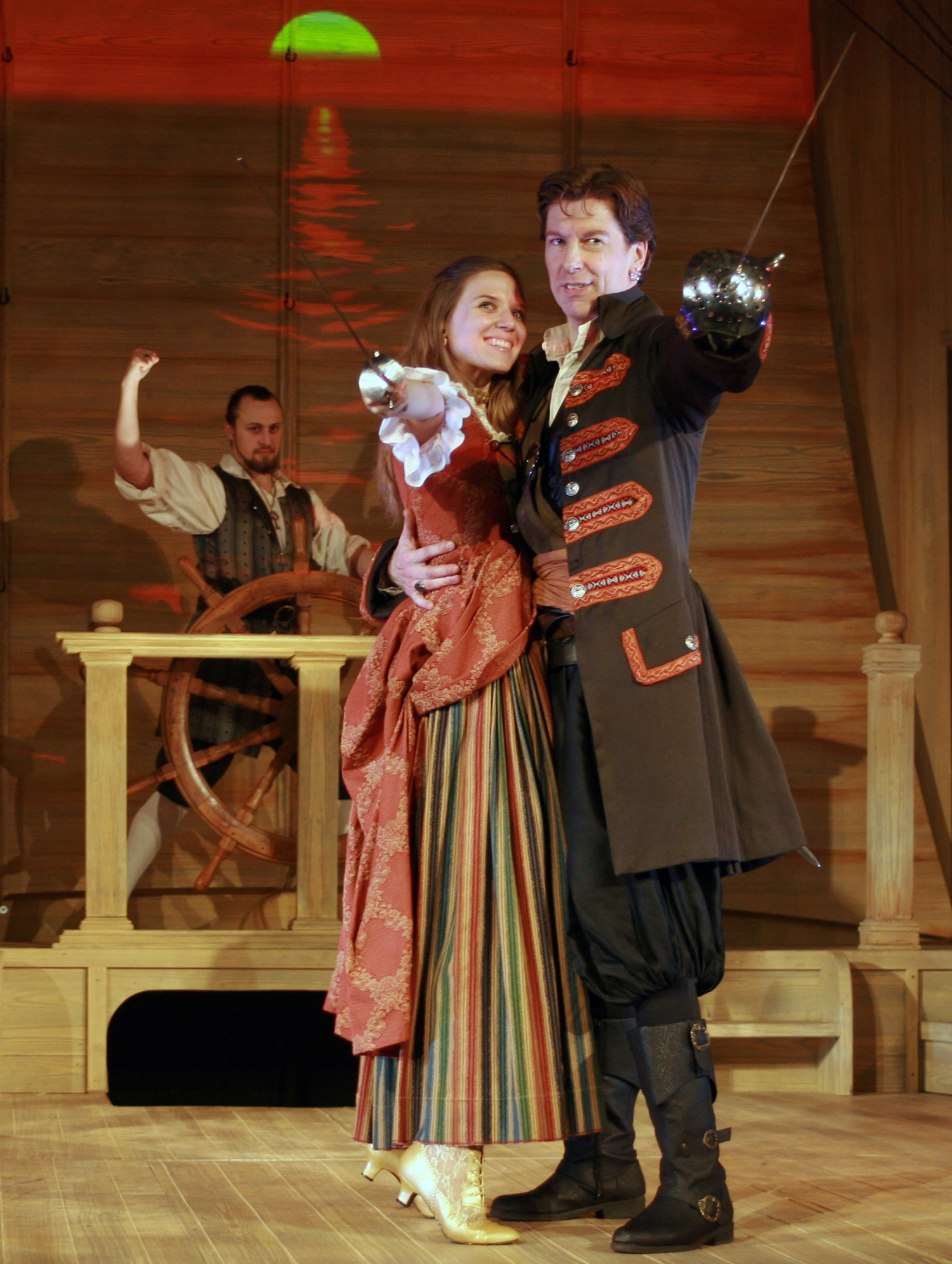 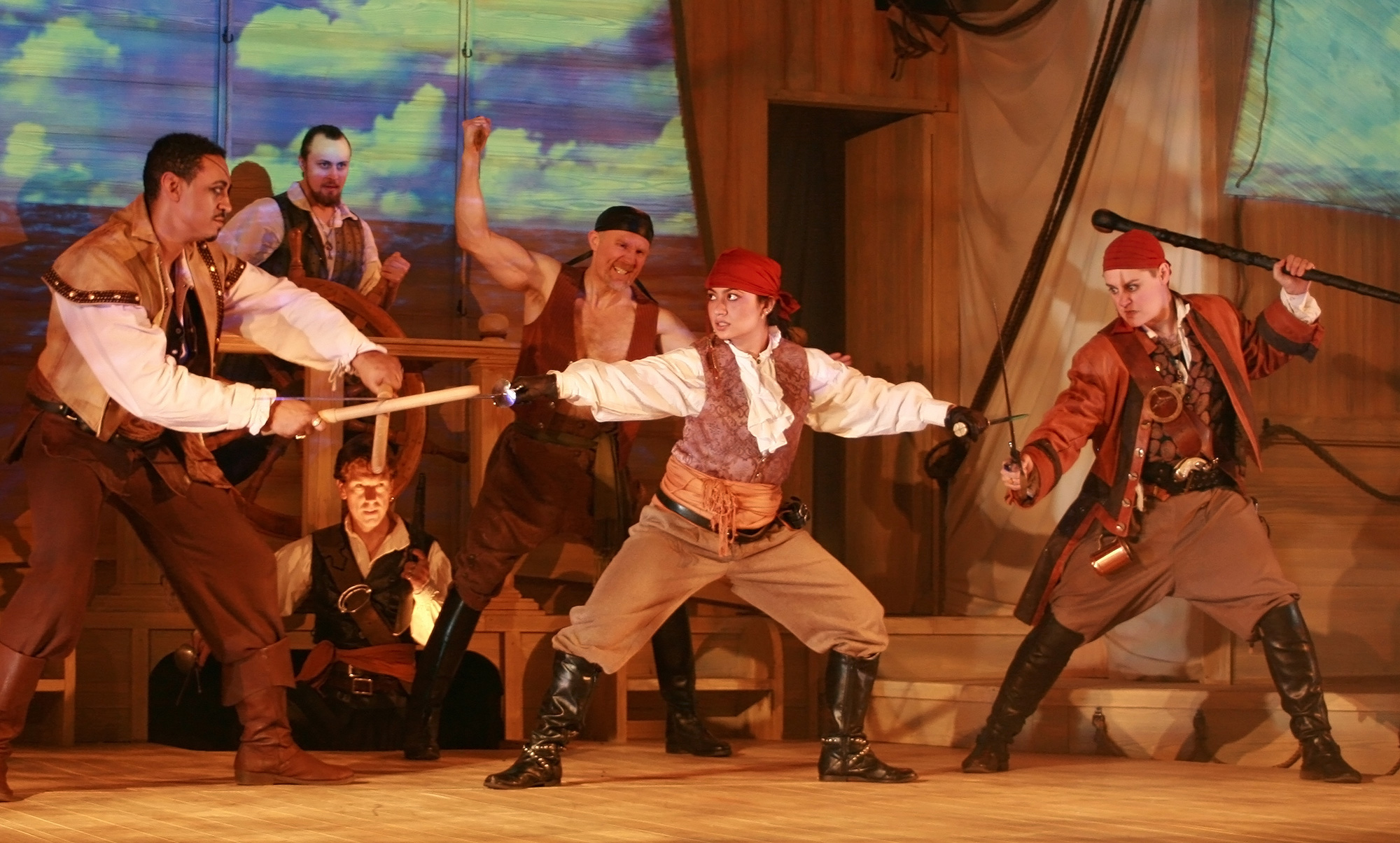 “Captain Blood! is outrageously entertaining. But leaving the production at that sells it short. It’s not just perfectly paced. It doesn’t just have the ideal blend of humor, romance and adventure. It’s not just escapism. It’s all those things, and it’s an intelligent, thoughtful work in its own right.” Edge Media Network Highly Recommended

For licensing or more information contact David Rice at drice@firstfolio.org or use this form.

Original Production dedicated to the memory of Alison C. Vesely, Founding Artistic Director of First Folio Theatre, who was a key part of the original development of this script.